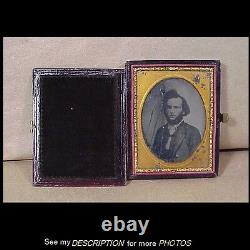 Antique 1/4 Plate Ambrotype Civil War Major General Charles Edward Hovey Double Sided 1/4 plate double sided Ambrotype of Civil War Major General Charles Edward Hovey Marked on the corner of the mat CHAS Dressed in civilian clothes circa 1855-60 Major General Charles Edward April 26, 1827 - November 17, 1897 was born in Thetford Vermont He graduated from Dartmouth in 1852 and taught school in Framingham, Massachusetts He moved to Illinois, where he helped organize Illinois State University and served as its president from 1857 to 1861 He married Harriette Farnham (Spofford) Hovey of Nantucket, Massachusetts They had 2 sons Fred and Richard. If you don't see it... Tags intact, not polished, altered, etc... Items with age typically display patina along with signs of use Be sure to view all the photos we take the time to process and display in a clear large format Thanks rjb670.

This item is in the category "Collectibles\Militaria\Civil War (1861-65)\Original Period Items\Photographs". The seller is "rjb670" and is located in this country: US. This item can be shipped to North, South, or Latin America, all countries in Europe, all countries in continental Asia.