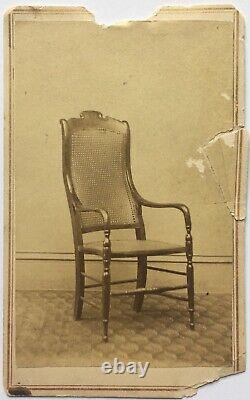 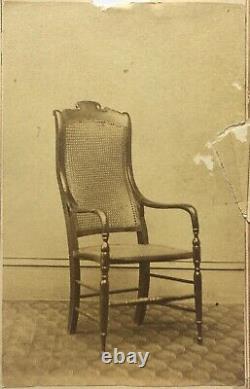 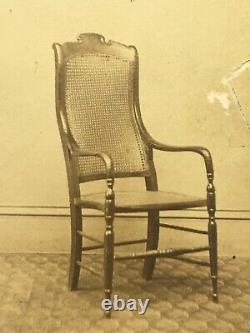 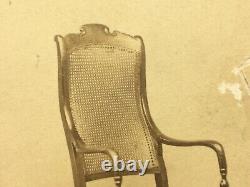 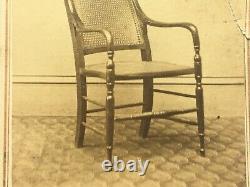 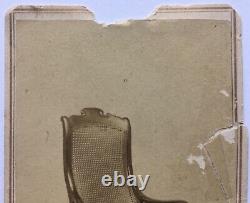 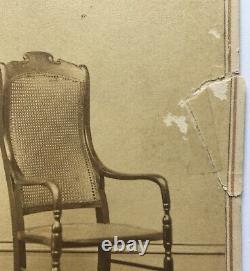 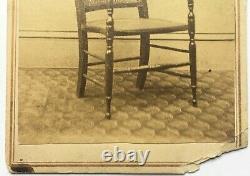 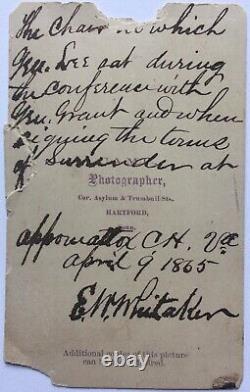 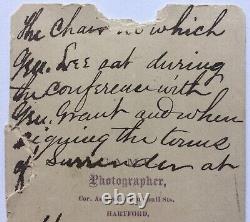 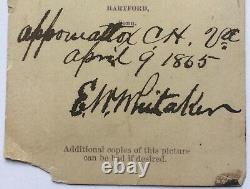 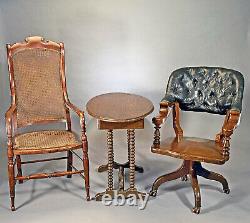 An incredibly rare and amazing piece of Civil War and photographic history in the form of an original 1860s carte-de-visite photograph from Hartford, Connecticut photographer and Civil War Veteran, Daniel S. Depicts a scene of a single cane back chair which is famously known as the chair General Robert E. Lee sat in when he signed the surrender papers with General Grant at the Appomattox Court House in Virginia to end the Civil War. Further this original photographer has a handwritten inscription and signature in period ink from the actual Officer who took Lees chair, Brigadier General Edward Washburn Whitaker of Connecticut. Whitaker was one of the youngest Generals in the Civil War and was awarded the Medal of Honor. Inscription reads The chair in which Gen. Lee sat during the conference with Gen. Grant and when signing the terms of surrender at Appomattox C. A quick online search will reference this exact chair, along with Grants chair, which are currently displayed in the Smithsonian (see photo 12 of to compare) and tells us that after signing the document the Union Officers realized the historical significance of the chairs and Whitaker specifically took Lees chair with him (read below). Now my assumption is that Whitaker brought this chair back to CT (where he was from) and had photographer (and fellow war veteran) Daniel S.

Camp of Hartford, CT (who perished in a fire in 1878) take a photograph of the chair. Reverse side of image boasts printed photographer informated from Hartford, CT photographer and Civil War veteran, Daniel S. On April 9, 1865, General Ulysses S.

Grant and General Robert E. Lee met in the home of Wilmer McLean at Appomattox Court House, Virginia, to negotiate the surrender of the Confederate Army of Northern Virginia to the United States Army.

Sitting in the chair on the left, Lee discussed the fate of his troops. Grant then, leaning over an oval table, drafted and signed the final terms of surrender. While there were still Confederate troops in the field under other commanders, Lee's surrender effectively marked the end of the Civil War.

In three separate donations, by 1915, these items were reunited at the Smithsonian Institution. Photo in As Found condition with some gentle chipping and wear. One chip along the right edge was resecured with a small strip of tape on the front side by a previous owner. No scuffs or scratches to the image and no creases or bends. Inscription and signature are clean and legible with gentle bleeding from the ink.

The image and signature are both guaranteed genuine to the period and persons specified. Comes housed in a protective hard plastic sleeve. For gallantry in action in 1864. Whitaker and three of his brothers enlisted in the Union Army during the Civil War.

He originally enlisted as a sergeant in the 2nd New York Cavalry Regiment. On April 23, 1864 Whitaker was commissioned as captain of Company E of the 1st Connecticut Cavalry Regiment. He earned the Congressional Medal of Honor for his actions at Reams Station, Virginia. On June 29, 1864 by riding through enemy lines to deliver dispatches to Major General George Meade. The commander of the Army of the Potomac.

The Medal of Honor was awarded to him on April 2, 1898 - almost 34 years after his action. In October 1864 Whitaker was promoted to the rank of major.

Who was promoted to brigadier general shortly before he turned 21. He was honorable mustered out of service on August 2, 1865.

He is buried in Arlington National Cemetery. While acting as an aide voluntarily carried dispatches from the commanding general to Gen. Meade, forcing his way with a single troop of Cavalry, through an Infantry division of the enemy in the most distinguished manner, though he lost half his escort in the desperate ride at Reams Station, Virginia on 29 June 1864. When he perished while fighting a fire on May 24th, 1878, Hartford photographer Daniel S. Camp died as he had lived: in harms way and in the line of duty.

Besides being a respected photographer, Camp was a volunteer firefighter, Second Lieutenant in the City Guard, and a veteran of the Civil War, having seen service in Connecticuts Sixteenth Volunteer Infantry. In his short 34 years he left behind a legacy of public service as well as some truly remarkable photographs. Camp was born in Hartford in 1844. In 1862 he joined Company F of Connecticuts Sixteenth Volunteer Infantry. He saw action in several major battles of the Civil War, including Antietam (where the infantry was ambushed in a cornfield and lost a quarter of its men) and Fredericksburg. On April 17, 1864 while garrisoned in Plymouth, North Carolina, Camps entire regiment was taken prisoner by the Confederates.

Camp spent months in the notorious Andersonville Prison before being released. He mustered out on June 24, 1865. After leaving the army, Camp started working as a photographer in Vernon, Connecticut.

In 1868 he would move his business to Asylum Street in Hartford, where he would spend the rest of his career. He never lost his taste for public service and became a volunteer firefighter. Camps photographs include a view of the intersection of Asylum and Trumbull Streets, which may have been taken from the window of his studio, a view of a break in a dam at the West Hartford reservoir that occurred in the fall of 1867, and a military encampment, as well as the more typical portraits and landscape views that formed the stock in trade of nineteenth century photographers. On the night of May 24th 1878, a fire broke out on Market Street, Hartford. While fighting the blaze, Camp and two other firefighters were crushed by falling walls.

The article reporting the fire described Camp as the well-known photographer, and a universally popular man. The Firemens Benevolent Society published a resolution recognizing his noble and upright character, his undaunted courage, [and] his kindliness of heart.

Thousands of people packed the streets for Camps funeral on May 26th. He was laid to rest in Zion Hill Cemetery in Hartford, where his worn and weathered gravestone can still be seen today. Measures 4 x 2 3/8. Please enjoy the photos for further item details and if you have any questions feel free to ask. This item ships to the USA only. Thank you and be sure to check out our other listings! The item "Daniel Camp Civil War CDV Robert E Lee Surrender Chair Signed Edward W Whitaker" is in sale since Saturday, July 10, 2021.

This item is in the category "Collectibles\Photographic Images\Vintage & Antique (Pre-1940)\CDVs". The seller is "massachusettsantiques" and is located in Northfield, Massachusetts. This item can be shipped to United States.